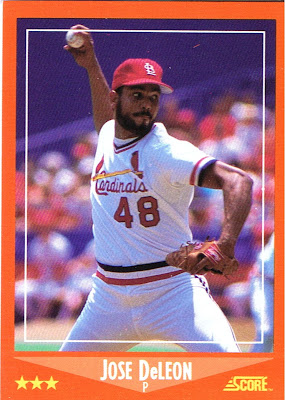 I just got finished talking about how great it is that Score put the uniform numbers on the backs of the cards. Check out the front--DeLeon wore #48, right? Well according to the back, he wore #26. What gives? Well check out the 1987 White Sox roster. He wore #26 with them. So, this is a traded set, but they used the number from his previous team? That's ridiculous.

We talked a lot about DeLeon on his card on the 88 Topps Cards blog. Only a pretty damn good pitcher could lose 19 games twice in his career. His career neutralized record is 106-101, compared with his actual figure of 86-119. 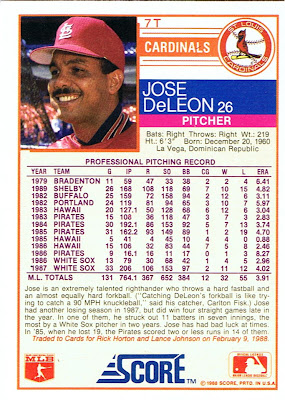 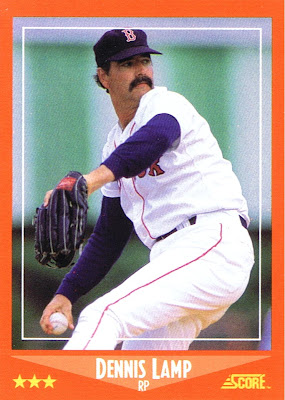 One great thing about this set is the fact that jersey numbers are included. Lamp's is 49, as mentioned on the back. I wish all baseball cards included jersey numbers. I guess in this day and age, players are far more recognizable than they used to be, and few fans identify players at games or on TV by their jersey numbers. But before TV, oftentimes fans had to go by jersey numbers.

I can't tell you how many times I've looked at a baseball card and wanted to know or remember the player's number, but couldn't. Thank you, 1988 Score!

Lamp has the second-most wins in a season with 0 losses since 1901.

I don't know too much about Lamp or his career but I do feel bad for the guy. He got knocked around badly in Game 1 of the 19990 ALCS and pitched to an ERA of 108.00 He didn't get into another game in that series, which if he had perhaps he could have gotten that figure down into double or even single digits. 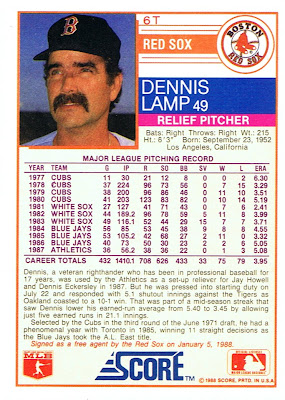 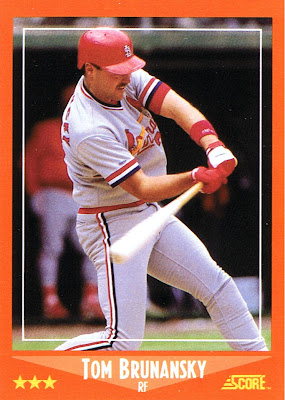 Contrast this photo to the one on card #1, Jack Clark. Very similar, and yet this photo sucks by comparison. Can't see Brunansky's eyes at all, and that ruins it. The difference between this set and other sets from 1988, though, is that Score makes up for it by putting a headshot on the back. Then it's OK that we can't see all of Bruno's face, since it's right there on the back.

Brunansky got a lot of outfield assists in his career, 117 to be exact. That's an awful lot. I have no idea how good of an outfielder he was overall. But I guess he must have been pretty valuable just as a defensive presence. I think a lot of outfielders' value is in reputation. A first base or third base coach may decide that they will not try to run on a guy's arm based on his reputation (i.e. previous assist totals.) I think that's one reason why when an outfielder puts up a big year in assists, his assist totals often fall off dramatically in subsequent years--because there end up being fewer opportunities to nail runners. 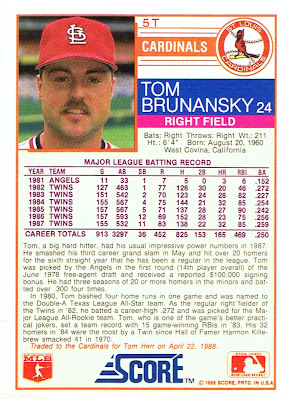 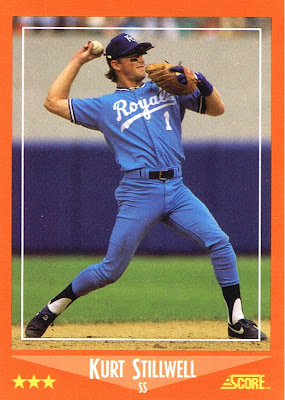 It seems that all of the photos show at least one body park outside the white border. Here it's Stillwell's left foot.

I like a lot of things about these cards, but one thing I don't dig too much is the hot pink used on the position banner on the card back.

I didn't know until reading the card back that Stillwell's dad was a player for the Senators. It's kind of odd that they suggest that the elder Stillwell's playing career signaled the younger Stillwell's talent. His dad had just 38 AB in the majors and hit .211, for goodness' sake! 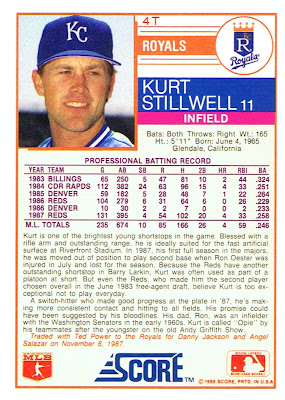 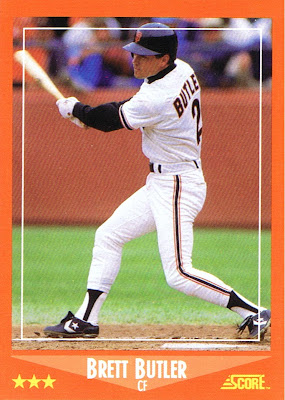 Well the orange card color looks pretty nice with the Giants uniform. Plus, the photo on the back is exceptionally nice for a headshot, with the batting cage and stadium both visible in the background.

Butler is one of just 2 players to have at least 4 triples every year from 1983 to 1995. The other? Future HOFer Timmy Raines.

I remember when Butler switched from the Giants to the Dodgers before the 1991 season. Back then, it was sort of a big deal as the fans of neither franchise liked picking up players who had played for the other one. These days, though, it's really no big deal. Guys switch teams often, and those who live on the west coast often favor staying out there, limiting themselves to the Giants, Dodgers, Padres, Angels, Athletics, and Mariners, plus maybe the Rockies and Diamondbacks. Seems like there are players who play for both LAD and SFG all the time nowadays. 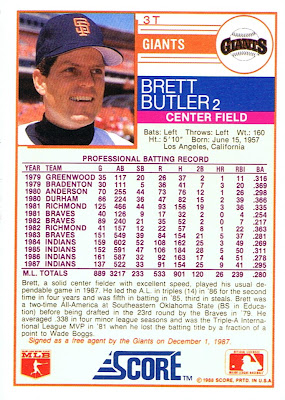 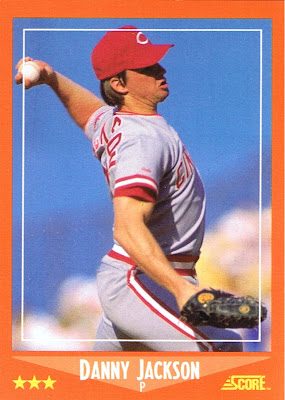 So as far as I can tell, this update set has the same design as the base 1988 Score set, except for the color of the cards. These are a type of orange that didn't exist in the base set. The base set had yellow cards, as well as a sort of dark orangish-yellow (plus blue, purple, green, and red.) This color was new for the update set. I think it would have been nice if they'd chosen a color not so similar to two of the colors used in the base set.

As with the base set cards, notice that there is a subtle color change going from top to bottom of the card. The color is more saturated at the top.

Jackson faced 4 players whose last name is also Jackson. Can you guess them all? If you guessed Bo Jackson, start over. They were teammates.

It's a great debate whether Jackson deserved more consideration for the 1988 Cy Young Award than he received. Orel Hershisher won it unanimously despite both pitchers posting identical 23-8 records. True, Hershiser was better in most other statistical categories and also rung off that great scoreless inning streak.

How about each guy's neutralized 1988 stats:

Hershiser was better, but not by much. I'm surprised that Jackson didn't get even 1 first-place vote. 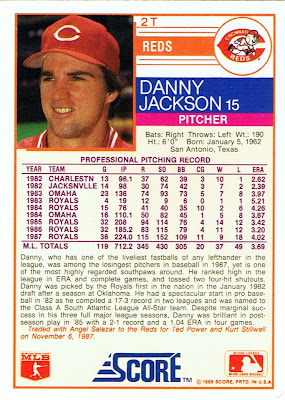 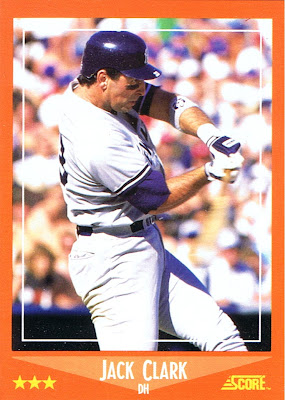 There is a lot to like about the 1988 Score set. Rather than list all the great attributes here on the first card post, I'll mention them as we go along in the set. This particular card happens to be an awesome photo, capturing Clark's gazed fixed on the incoming pitch

The text on the back mentions Clark's streak of games with a walk. Here is a link to such streaks, showing that Clark tied Toby Harrah's mark of 16 games in the A.L. and fell one shy of Willie Randolph's A.L. mark of 17.

Unsurprisingly, that record has since been broken. Here is a link to such streaks occurring 1993 to 2008, and Barry Bonds had 2 streaks longer than 16 games. Nick Johnson had one too.

Clark is actually underrated, I think, for a few reasons. One was that although he was a power hitter, he didn't amass very large HR or RBI totals in many individual seasons, topping 30 HR just once and 100 RBI just twice. Another was that he didn't go to the playoffs very often. And another is that his big free-agent contract with the Yankees was perceived by many as a bust even though the numbers suggest he performed pretty well in his last several seasons. Don't let those factors fool you, though. Clark had a career OPS+ of 137, and was over 125 every season from 1978 to 1991 (except for injury-lost 1986), a period that includes his final years with the Yankees, Padres, and Red Sox, barring his last half-season in 1992. He walked nearly as much as he struck out and was a pretty productive player.

I remember him more for stuff that happened after he retired, such as going bankrupt while owning many cars and allegedly begging for the Dodgers hitting coach job because he needed the money. 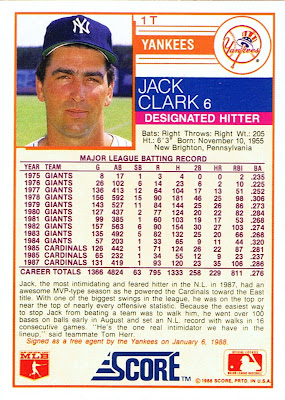 I'm back with a new blog, this time to go through the 1988 Score Rookie & Traded set, one card at a time like I did with 88 Topps Cards. I'm focusing only on the update to the 88 Score set because I wanted to tackle something a little smaller, plus there is already a blog about 1988 Score that shows many of the interesting cards from that set. I collected 1988 Score but I have never seen this update set before, so it will be new for me.

First a quick peek at the box. 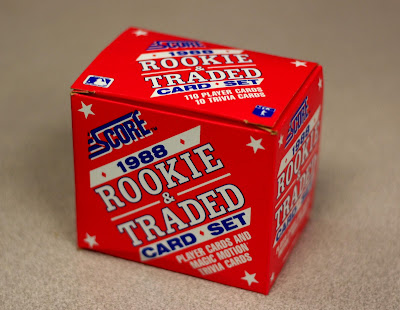 A quick note on why this blog replaces my aborted 78 Topps Cards blog. I found that my interest in the 1978 Topps set was limited by the fact that many of the players were unknown to me. I simply find it more interesting to study cards of players I am familiar with. I also think I went a bit too heavy with too many features for each set of cards (i.e. too many comments on the photos, too many stats, too many polls, etc.) and I will be doing a stripped-down version here much more similar to how I did 88 Topps.

After I finish this set, I will move on to other update/traded/rookie sets from subsequent years. If you have any complete sets like this in good condition that you want to trade, just let me know. Also if you have any interest in trading for any of the cards you see here (or the complete set) let me know. I will not be doing giveaways on this blog.

Anyway, once you open the box, here's what you see. 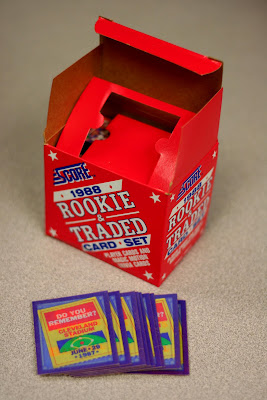 There are 10 magic motion trivia cards, incidentally the first 10 from the set. Lifting that little red flap of carboard gets you to the actual cards, starting with #1, Jack Clark.
Posted by Andy at 11:27 AM 1 comment: