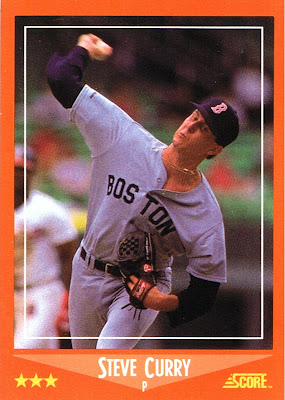 Here's another guy I never heard of. Curry made it into 3 games for the Red Sox in 1988, pitching to an 8.18 ERA, and then never appeared in the majors again. An unidentified White Sox player is in the background.

Checking out Curry's gamelogs, two of his 3 starts were against the White Sox, and one was in Chicago. So this photo was probably from that July 10th game at Comiskey. Hmm, maybe we can figure out which White Sock that is. Looks like a guy leading off second base, and he's pretty dark-skinned. Check out the box score from that game. Gary Redus got to second base in the first inning, but I think his skin was significantly lighter than that of the fellow in the photo. Greg Walker (white guy) got to 2B in the first inning, and then Daryl Boston got there. Boston (Daryl, that is) was #8 and I think that's who we are looking at.

In the second inning, Redus got to 2B again. In the third inning, no White Sock got there. In the fourth inning, Fred Manrique got there, but again I think his skin was much too light to be the guy in the photo. Redus got to second yet again that inning. I think 5th inning, a couple of White Sox got on, but nobody stopped at second before Curry was knocked out of the game.

So there you have it: Daryl Bsoton.

The oddest word on the back of the card is clearly "Manatee." 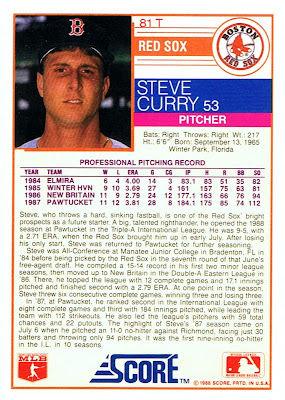