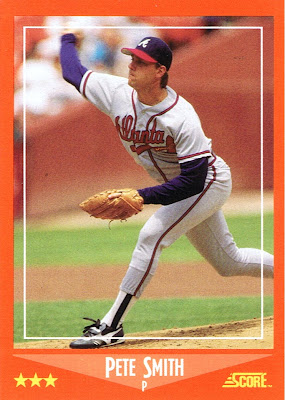 This is one of the more boring photos in this set, which is saying something because it ain't so bad. On the back, this is one of a number of upcoming cards where the player has squinty eyes.

Check out how interesting the text on the back of the card is. Smith was believed the head of "Atlanta's impressive young crop of pitching prospects," which at the time included Tom Glavine, John Smoltz, and Steve Avery.

How about the trade that is mentioned. Good for both teams? Really? Smith never won more than 7 games in a season for the Braves. Virgil was a decent catcher and league-average hitter. Bedrosian, meanwhile, won a Cy Young for the Phillies and was then traded for Terry Mulholland, Charlie Hayes, and Dennis Cook, 3 players that all did good things with the Phillies and were traded later for more talent. Thompson was a good player for the Phillies who eventually was on the 1993 NL champion team and is now their hitting coach.

Most unexpected word on the back is "star" since Smith was never one in the big leagues. 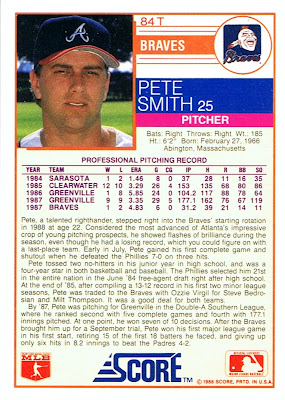